Want to know what really blew my mind in Ethiopia? The religious history. I totally recommend you pick up “The Sign and the Seal” by Graham Hancock, which will do this so much more justice.  He’s crafted a spellbinding (and controversial) history/adventure story about his investigation of the Ark.

Ready for this? Ethiopian tradition has it that:

Hancok’s quest to discover whether the Ark is really in Ethiopia, as told compellingly in his book, includes ancient Egypt, Jerusalem, the Bible, the occult, the Knights Templar, and, of course, Ethiopia, itself.

I visited many orthodox churches everywhere we went, but the most awe inspiring were the churches said to be built by King Lalibela in the late 12th century. Some of them are monolithic churches, carved from one single rock. Amazing.

The stories tells that King Lalibela, again believed to be the son of King Solomon, went to Jerusalem to see where he was born (or at least where his father lived — I forget if he was born there or just conceived there), and died while he was there. Then while in Heaven, God sent him back to Ethiopia to build the churches. So, he built one set to look like those he saw in Jerusalem, and another set to look like those he saw in Heaven. 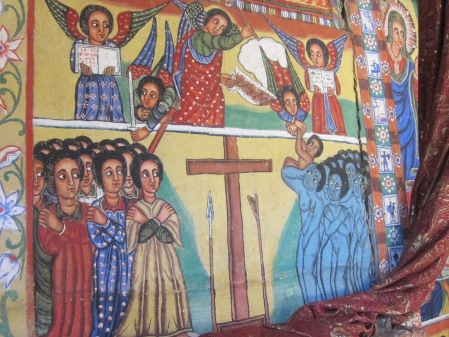 Seeing what a strong role the Church plays in the day-to-day lives of most Ethiopians, I couldn’t help but wish it used that power in different ways. Stay tuned to hear thoughts on that…