I know that’s a shocking title, but it’s the truth.  And it conveys how pervasive travel really is throughout my life (and was through hers).  But, the odd truth is that she died on a work trip, as did her dad.  Even odder, he was traveling from Chicago to California, and she was traveling from California to Chicago.  Live by the sword, die by the sword, so to speak.

My mom was born in Washington D.C., where her dad worked for the Truman administration.  My grandfather used to travel to San Francisco every month,  and once or twice his whole family joined him there.  He died when she was 10, and her mom moved the family to Europe (Italy and Switzerland) for a year.

When they got back stateside, they moved to Chicago, where my grandmother remarried.

My mom went onto college in D.C., and then moved to North Carolina and Texas with my dad after they were married (he was in the army).  When he was deployed to Vietnam, she moved them back to Chicago.

After my parents divorced, we moved with our mom to Arizona, and then California.  We went on lots of trips to places like Hawaii, New York, and more than a few national parks.

My mom’s job was crazy high-travel, mostly back and forth from LA to Chicago.  My sister and I used to joke that she had a second secret family there :).  But, after years of giving her a hard time about her frequent trips to Chicago, they became a blessing.  My sister and I had each moved there after college, and it was so awesome that our mom was out and able to visit with us a couple of times a month!

Weirdly enough, she was in Chicago when she died.  As sad as the whole experience was for us, the silver lining was that she was in Chicago since we could be with her for the whole process of the bypass surgery, recovery, stroke, life support, etc.  And it meant we could bury her in Chicago.  I mean, sure, we could have moved her body if she had died at home in LA, but I don’t think we would have thought about it.   As it was, we buried her in Skokie, and go visit her regularly.  If she hadn’t been traveling at the time of her death, we couldn’t do that.  After giving her such grief for her trips to Chicago, I couldn’t be more grateful for them now. 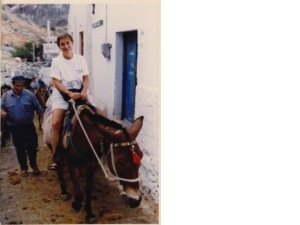